I am born dark brown although many people prefer to call my colour black. OK, then I am black! Do you have a problem with that?

It’s shocking how ignorant people remain about racism! In a week I experienced two cases, and I will share the most bizarre example here as it happened in my neighbourhood with someone I knew for over 10 years and with whom I did share joyful moments in the past. Until recently we always smiled at eachother, but a few days ago he finally removed the mask and showed his true self.

My friend dropped by and parked her car along the street in a way that we see many times and is totally legal. Despite this, he walked up to her and ordered her that she should not park there. Meanwhile across the street another car was parked which obstructed a footpath and access to a public wastebin. So my friend asked him if he also ordered that car owner to park somewhere else.

When she told me what happened, my husband and I were very curious to find out why he ordered her to remove her car. So we decided it was best to have a neighbourly chat about it. I went to his place and explained why I was at his door. Immediately he started shouting ”I told your friend not to park there. She said she would be gone for 5 minutes but she was gone for an hour”.

I asked him “Do you tell everybody who parks there, not to park there?” And he said that he doesn’t talk to others. So I became more curious and asked why he decided to confront my guest today. He responded “Are you accusing me that I stopped her because she is a black woman?” I told him not to put these words in my mouth, and that I didn’t mention her skin colour. I also told him that it would have made  sense for him to talk to both cars owners which made him more angry, saying “You people make something big out of such a small thing, you are making an elephant out of a mouse. I am not listening to your nonsense. Does your husband know what you are doing to me?”

As I felt he now tried to shame me, I responded “Wait a minute, what am I exactly doing to you? I came to talk in good faith, but now you seem to turn this into something else. I am not hiding anything from my husband. You can go and ask him yourself if he is aware of what I am doing”. By now he was furious, telling me to “Go away with your nonsense!” before slamming his door.

I was left in shock as I respected him for 12 years. His decision to deny me the opportunity to explain how I experienced this situation, finally showed the real person hiding behind this smile. Looking back at what happened, to me it seems that he had been waiting a long time to share his true feelings about “us people”.

No doubt that one day he will understand that by denying “us people” to share our experience he is trying to silence or shame us into not mentioning the obvious racism that we experience so often. But if I see wrong happening, I will not be silent and continue to speak up.

One thought on “You people”

I had great and Inspiring day in National HIV Conference in Ireland. Thank You for inviting me!#HIV #ireland #hivcommunity #wellbeing
Thank You Lord to guide me safe from Amersfoort all the way to Dublin .Keep blessing me with Positive energy I will continue to be the VOICE for Voiceless and an HIV stigmafighter
When blessed with delicious Weather ,walking becomes an easy game for my Healthy New Me lifestyle #healthynewme💚 #fit2beatdiabetes #walking #healthylifestyle #superwoman #hivstigmafighter #uu
Dear Person living or affected by HIV and AIDS, 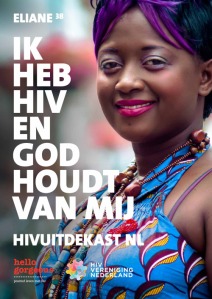